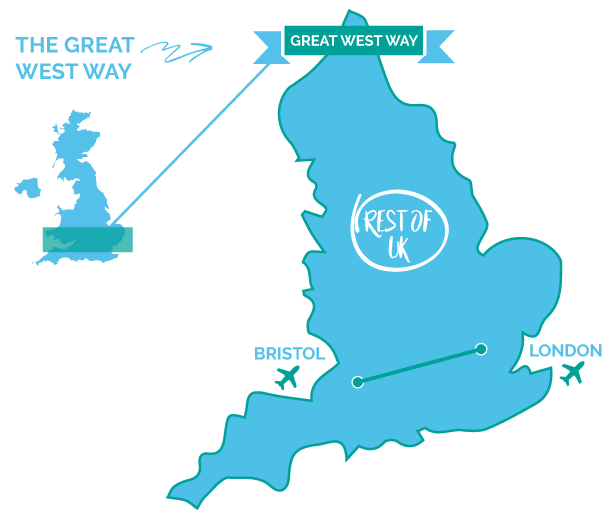 Launched in 2019, England’s Great West Way® is a 125-mile touring route stretching between London and Bristol that uses well-established routes to connect the two centres.

The routes allows cyclists to roam through idyllic countryside as well as passing through historic towns and villages.

We are delighted to offer this new initiative and take you out of London and cross-country to Bristol in the South-West. You will also be perfectly placed to head North to The Cotswolds or South to Cornwall and the route can even be combined with one of our tours in these centres.

The Northern and Southern Routes.

There are two routing options, both of which leave London and head westwards to Windsor before splitting near Maidenhead. The Northern route runs via High Wycombe and Oxford and heads off the way slightly, meanwhile the Southern route runs through smaller towns and villages at the bottom edge of The Cotswolds. The two routes rejoin to enter Bristol, or as an alternative clients can complete their tour in the historic Town of Bath Spa.

London to Bristol via Oxford

This cycling trip begins in London, exiting the Capital to the West and progressing to Windsor by bike where the routes includes visits to Oxford and Swindon. The routes progress through beautiful English countryside along well-established routes...

England’s Great West Way® refers to a corridor of routes stretching across Central England from London in the East to Bristol (or Bath) in the West. London and Bristol are both well-connected urban hubs with...